As Power Max® belts are wide in proportion to their thickness, they must have extreme crosswise rigidity to keep them from dishing in.
This dishing would cause the tensile cords to become misaligned, leading to uneven speed control and excessive wear on the cords, causing premature failure. 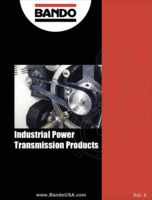